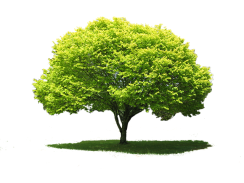 I was only away four days, maybe four and a half. In that short period of time, the forest behind our house has grown some new leaves. To the point where I can’t see the houses on the other side.

Every year it’s the same. You wake up one day and BAM!, you can’t see the neighbours… just like that. In this case the BAM was spread over four days but the idea is the same.

Unfortunately, with the leaves, comes the bugs. The downside of having a forest in your backyard.

So here we go… my Ode to Leaves and a lame attempt at throwing some words together.

The Leaves are Back, the Bugs are Back

The Bugs can Leave, the Leaves can Green

The Green can Screen, the Neighbours can Scream

The Scream is Silent, the Silence is Golden

The Silence is Back, the Leaves are Back

It’s true, it really does get quieter as the leaves come in… I looked it up.

Found this on Landscape Noise Barriers:

Sound is absorbed by all parts of the plant such as leaves, branches, twigs and wood. The rougher the bark the better it absorbs sound. Experts say the best species for this will have many branches and thick, fleshy leaves with thin petioles (leaf stem).