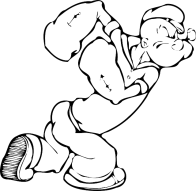 Looking around for something to write about when I spotted my son’s girlfriend, so I asked her. The first thing out of her mouth was spinach, literally.

And I had my topic…

She was eating a very large spinach salad while I was enjoying a large, Grandma’s Style, butter tart. A reward for eating healthy all day. I was thinking about yesterday’s post, Weight for It, while eating it. At least I stopped at one, it wasn’t easy.

I was on a spinach kick for a little while after my Doctor told me my iron stores were extremely low. Problem was, you had to eat a bushel of the stuff to have any effect. I tried salads, sandwiches and smoothies with spinach. To be honest, just got bored with it, lost interest. Spinach simply can’t compete with butter tarts or anything else for that matter.

Some interesting spinach facts I found at Spinach Fun Facts:

I find that third point hard to believe. I can only assume people who read Bon Appetit have some weird fascination with spinach. Out of the hundred people I know, only a few like it. I’m not a spinach hater, I will eat or drink it, just not something I go out of my way for.

All this from watching Christine eat a large bowl of spinach.